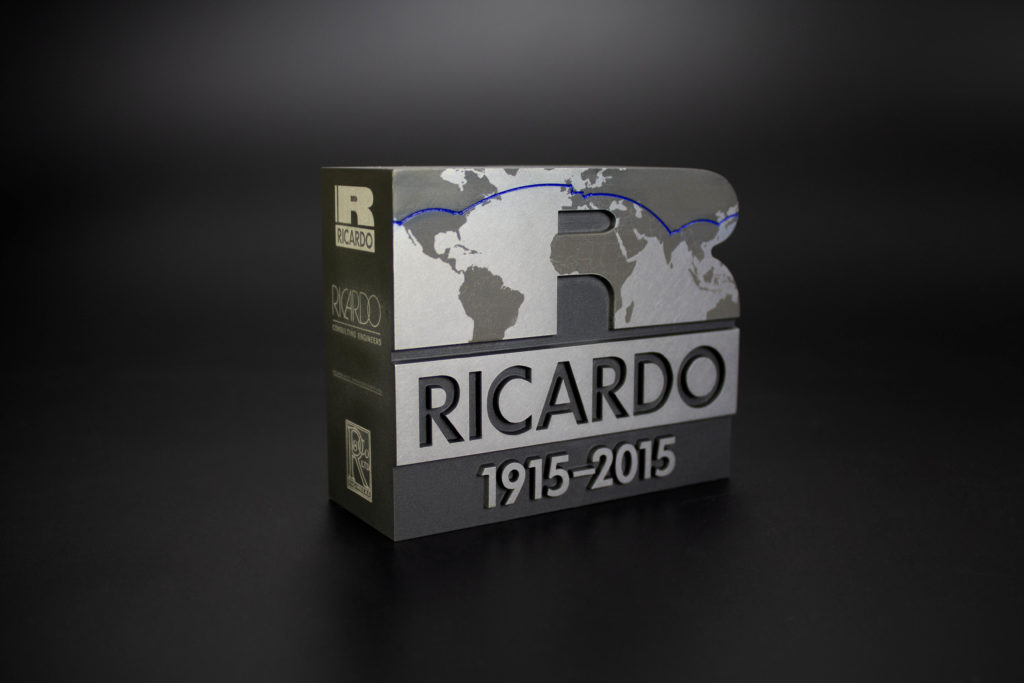 Engineering a baton for an epic journey

When engineering, environmental and strategic consultancy Ricardo decided to celebrate 100 years of success, they wanted to mark the occasion with a memorable journey.

The company chose to embark on a round-the-world rally, taking in the firm’s global technical centres in Europe, Asia and America. The journey would be split into different legs, with the first team setting off from the company’s headquarters in Shoreham in a McLaren MP4-12C, whose engine was built by Ricardo.

All the minds behind the Ricardo 100 Global Challenge hoped to highlight the engineering feats the company had achieved over the years and raise money for charities along the way. Engineers without Borders, Unicef, WasteAid UK and Cancer Research were just a few of the recipients set to benefit.

The firm also hoped the journey would help to champion engineering and inspire the next generation of technical masterminds.

A baton to reflect Ricardo’s commitment to excellence in engineering

Just like the Olympic torch, Ricardo decided it needed a baton to symbolise the journey the company was set to embark upon, and something which could be passed on from one team to the next across continents.

The finished article therefore needed to be sturdy whilst at the same time reflecting the company’s ethos of delivering excellence through technology. It also had to convey Ricardo’s commitment to quality engineering. After all, this was the company whose founder, Sir Harry Ricardo, was knighted in 1948 for his work in the field of internal combustion engineering.

Because the baton needed to be ready for the beginning of the challenge, which was just a few weeks away, achieving a short turnaround time was critical. Unfazed, we delivered, taking just two weeks to machine a billet of aluminium and transform it into a high-quality, precision-engineered, polished component.

Ricardo produced a 3D CAD rendering to illustrate how they wanted the end product to look.

Using only the best machinery, coupled with second-to-none craftsmanship, meaning the end result would be the best it could be. It therefore chose to select its state-of-the-art 5 Axis machine* to fashion the company’s logo – the Ricardo ‘R’ – out of aluminium. *this machine was part of the Engineering division which is no longer part of Fine Cut.

The 5 Axis machine employed for the job is capable of running at 25,000 rpm. This meant this phase of the project was produced quickly and cost-effectively.

Once this process was complete, it was sent onto the engraving department who machined the lettering with a device designed to produce very accurate results. It boasts +/- 5 micron position accuracy, acceleration of five metres per sec2 and rapid rates up to 30 metres per minute.

We were confident that our commitment to precision machining would lead to a top-quality end result. The next process was shot blasting, after which the baton was sent to be anodised in a dark graphite grey colour.

Then it was forwarded onto the laser engraving department so that the world map, company logos and names of the company’s various global technical centres involved in the challenge could be laser-etched onto the surface using a Fibre Laser Engraving Machine.

Lastly, in order to produce a polished product, the team clear coated the baton and infilled the route of the challenge, which was engraved across the front, with blue paint.

Obviously happy with the end result, Ricardo said Fine Cut had “done an excellent job of incorporating so many different processes with flawless results and on time delivery”.

Following the baton’s progress across the globe

The challenge began on May 14th and is expected to be completed in July. Ricardo is posting pictures of the epic voyage on social media, so anyone interested can follow the teams’ progress on LinkedIn, Instagram and Twitter.

Employees at the company’s technical centres in India who were involved in the global journey have most recently climbed the Himalayas in New Generation Scorpios from Mahindra & Mahindra. The vehicle was chosen because Ricardo worked in collaboration with engineers from Mahindra to develop the vehicle’s 5MT320 five-speed manual transmission.

Ricardo India president Mayank Agochiya said he was pleased to have been part of the challenge. “It has been fantastic for the Ricardo India employees who have participated in this leg and it is with some pride that we now pass on the baton to our colleagues at Ricardo China for the next leg,” he said.

No doubt the baton will be displayed at the company’s headquarters once it finally makes its way back to the UK as a reminder of Ricardo’s great adventure.

Contact our team if you have a Bespoke project.

“Thank you very much for all the time and effort you put in to make this happen, and for your attention to detail.”

“Just wanted to let you know that the panels arrived safe and sound and I’m really pleased with them. I suspect I’ll need more in the future so will be in...”

“Just had our mdf panels arrive back with me, they look fantastic, thanks for all your help especially with the really short turnaround time.”

Engineering a baton for an epic journey